ARTHUR RANKIN, JR., Producer/Director and co-founder of RANKIN/BASS PRODUCTIONS, passed away early January 30th at his home in Bermuda at the age of 89 due to health issues. Along with his partner Jules Bass, he created the longest-running, highest rated TV special of all-time with the ANIMAGIC stop-motion production of RUDOLPH THE RED-NOSED REINDEER in 1964. This year will see the 50th airing of this classic and it will be celebrated in a very significant way in 2014.

Mr. Rankin’s career has included so much more than that one special. With his partner and Co-Producer Jules Bass, he went on to produce such holiday classics as FROSTY THE SNOWMAN, THE LITTLE DRUMMER BOY, THE YEAR WITHOUT A SANTA CLAUS (with the heat miser and the snow miser), SANTA CLAUS IS COMIN’ TO TOWN, HERE COMES PETER COTTONTAIL, RUDOLPH’S SHINY NEW YEAR, JACK FROST, THE EASTER BUNNY IS COMIN’ TO TOWN, and many more. His TV specials have become as much a part of the holidays as Christmas trees and Easter eggs. Many generations of fans have grown up on these holiday classics.

After breaking in to the film industry with Mr. Bass in the early 1960’s with the syndicated series THE NEW ADVENTURES OF PINOCCHIO and THE TALES OF THE WIZARD OF OZ, the General Electric company decided to sponsor their very first special, RETURN TO OZ, for the NBC GENERAL ELECTRIC FANTASY HOUR. This relationship lead to the formation of an Entertainment division at GENERAL ELECTRIC called TOMORROW ENTERTAINMENT and they would finance all of the RANKIN/BASS productions. “After we made Rudolph,” says Rankin, “Our phone was ringing off the hook. Can we have one of those? We had shows running on all three networks simultaneously.” His core group of such talented people as Jules Bass, Maury Laws, Paul Coker, Jr., Don Duga, Tad Mochinaga, Masaki Iizuka, Romeo Muller, Jack Davis, etc. made this all happen. RANKIN/BASS PRODUCTIONS were based in New York BUT also set up shop in Japan and Canada.

In the later half of the 1960’s, the studio began to branch out and produce feature films with Joseph E. Levine including MAD MONSTER PARTY starring Phyllis Diller and Boris Karloff, THE DAYDREAMER with an all-star cast including Ray Bolger, Ed Wynn, Tallulah Bankhead and Burl Ives and their first feature film in ANIMAGIC called WILLY McBEAN & HIS MAGIC MACHINE in 1965. In the 1970’s they produced the classic full-length feature THE LAST UNICORN and many live action films including THE BERMUDA DEPTHS and THE LAST DINOSAUR for the ABC FRIDAY NIGHT MOVIE.

The studio had a long running relationship with writer Romeo Muller and he won a PEABODY for RANKIN/BASS’ THE HOBBIT, which was the very first film rendition of a Tolkien work. RANKIN/BASS went on to produce the sequel, RETURN OF THE KING, as well and were a major influence on the recent films.

Arthur Rankin also brought many Saturday morning cartoon series to the television screen including THUNDERCATS, THE KING KONG SHOW, THE JACKSON FIVE SHOW, THE OSMONDS, KID POWER, THE TOMFOOLERY SHOW and many more.

With co-producer Peter Bakalian, he continued to Produce films into the new millennium such as the theatrical THE KING AND I and another holiday special sponsored by the Coca-Cola company called SANTA BABY!

In 2012, Arthur worked with RANKIN/BASS Historian/Biographer Rick Goldschmidt and Wes Garlatz to release a lavish 15th Anniversary book on his entire career called THE ENCHANTED WORLD OF RANKIN/BASS: A PORTFOLIO (MISER BROS PRESS). His career is also well documented in the books MAD MONSTER PARTY and THE MAKING OF THE RANKIN/BASS HOLIDAY CLASSIC: RUDOLPH THE RED-NOSED REINDEER.

“Arthur will be missed by many,” says Goldschmidt. “His work has touched several generations of Entertainment fans and will continue to live on forever. I am so elated he was able to see his work documented and the effect it has had on his many fans all over the world.”

He is survived by his wife Olga, a Greek-born actress who in 2010 became the oldest newly graduated lawyer called to the Bermuda Bar — as well as sons Todd and Gardner. 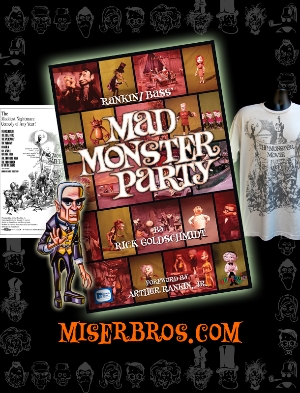 Watch Rick Goldschmidt on the Svengoolie segment of the Wolfman – Tonight!

There may still be a chance…